I’ve written before about switch ports being permanently disabled. This time it’s something new to me: VLANs that refuse to forward frames.

The network was pretty straightforward. A pair of firewalls connecting through a pair of switches to a pair of routers: 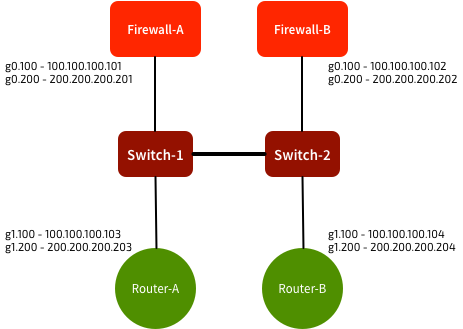 All was working as expected. All devices could see each other on all VLANs.

We received reports that we’d lost reachability to Router A’s VLAN 200 sub-interface. After doing some investigation, we could see that Firewall-A could no longer see Router A’s MAC address on G0.200. But everything else was fine - the VLAN 100 interface worked perfectly. So we knew it couldn’t be a physical interface issue.

Hmmm. What’s going on? First instinct: check the switch port configuration. Has anything changed? Nope. VLAN 200 still there, configured as expected. The router & firewall were still tagging frames with VLAN 200. But they couldn’t see each other, and the switch wasn’t learning any MAC addresses on that VLAN.

Why didn’t it work?

Workaround: Move to a new VLAN

We re-configured the Firewall & Router sub-interfaces to use VLAN 300 instead. We added that VLAN to the associated trunk ports, and everything started working. Full connectivity restored. But VLAN 200? It seems to be cursed.

I still haven’t figured out what happened here. Anyone ever seen anything like this?