Years ago, I was working at a large bank. It was a large site, with a lot of employees, so there was a staff member working full-time in the mail room. Occasionally I would receive a delivery of replacement parts. I’d get a phone call letting me know there was a package to pick up, so off I’d go to retrieve my parcel. Sometimes it would get brought up to me, depending on what it was.

The entire transaction could be completed in a few minutes - receive phone call, walk to mail room, find package, sign form, walk out. A simple transaction, and pretty hard to get wrong. Yet someone, somewhere in this bank had decided that we should be measuring performance, so we can improve it!  So each delivery would also mean I would be given a paper survey form to fill in, rating how the mail room had performed. Note: This was the performance of the local mail room staff being rated, not the performance of the courier company. I could rate them on friendliness, efficiency, overall satisfaction, etc. It was all utterly, gloriously pointless. As an added bonus, the paper forms resulted in more pointless data entry.

Yet someone, somewhere, decided we needed to measure things, to improve them. No-one was exempt. I presume even the receptionists had to randomly sample some of the site visitors. I wondered what would happen if I put a negative rating in a survey, or filled in some nonsense. I didn’t want the poor mailman to get a pay cut though, so I never dared try it. I always gave him top marks. I hope he got a pay rise out of it. They probably laid him off when management drove the company into the ground. I don’t think they surveyed senior management on what they were doing to the company. Or maybe they did, and knew just how big a hole they were digging? But no-one acted on the information, and they went broke anyway? But I digress…

Pointless surveys in an electronic world

I spend a lot of time on HP’s websites, as part of my job. I’m often searching through the knowledge base, updating cases, or downloading software and manuals. It depends on the client I’m working for, but on a bad day, I might be visiting their site several times every hour. I’ll also be using at least 2, sometimes 4 different systems to reach their site.

As anyone who has used HP’s website in the last decade knows, the website is a complete and utter disaster, and whoever maintains it should just give up. Admittedly, they’re trying to drag some parts of it into the 20th century, but there are still vast swathes of it that haven’t changed since I was a junior engineer. Large sections don’t even render properly with IE8, and the concept of human-readable URLs seems to have completely passed them by. When they designed the website for 640x480 screens, it wasn’t the modern mobile they had in mind - it was the 14” monitors we all used to use.

So it drives me mad when I get pop-ups like this: 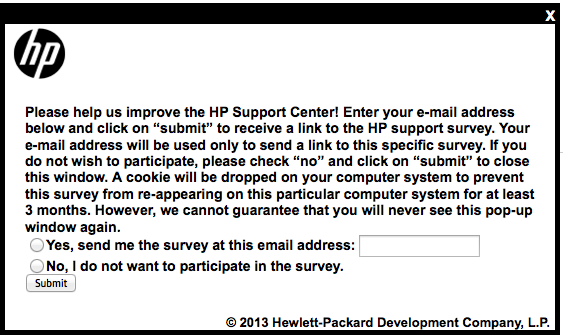 If you’re paying attention, you’ll see that it says that choosing “no” will stop this form from re-appearing for at least 3 months. The kicker is this part though “we cannot guarantee that you will never see this pop-up window again.” Not only can they not guarantee it, they seem to wilfully disregard any actions I take, and spring it on me several times a day. I can guarantee that I will see it at least once a day, usually more like 5 times.

After weeks of this - clicking “No” multiple times a day - I gave in, and decided “What the hell, I’ll fill in your damn survey form.” So I entered my email address, and got…nothing.

Hmm. So I tried again. And again. I’m determined to fill in the damn form, and you don’t even want to send it to me? Eventually they relented, and sent me a survey form. Complete waste of time, just the usual basic questions about how wonderful and useful their site is. Total waste of time. No useful medium for me to submit feedback, and no way to even complain about the survey pop-ups. What was particularly annoying was that they wanted me to enter an email address, on a web page, so they can send me a link to a form. Does the market research team have no idea how the World Wide Web is supposed to work?

The whole thing makes you wonder what’s going on. Who is asking for this research, and what do they do with the results? Is it like those mailroom surveys I filled in, probably carefully filed, never to be looked at again? Why is it that the feel they need to constantly ask for feedback? My current working theory is that it was like the fatwa issued against Salman Rushdie - someone in marketing ordered the survey forms, but they later got sacked, and since then, no-one’s been able to rescind the order.

It’s not just HP to blame

It’s very easy, but I don’t want to pick on HP here. They’re not the only ones doing this. Many of the sites I visit constantly seek my feedback, yet what do I get in return? Nothing. So if there’s nothing on offer, why should I bother with the survey forms? OK, so maybe I’ll stop filling them in. Ever. So now how valid are your statistics, if huge swathes of your user base never fill them in?

For that matter, what are you hoping to achieve with surveys, if nothing changes with your site, and it continues to be difficult to navigate, with poor rendering on modern browsers? Do people in marketing enjoy filling out surveys, so they think nothing of bombarding their users with forms? Or is it an ITIL-based process that seeks measurement of everything, even when effort would be better spent on fixing obviously broken systems?

But I do know that instead of “Do Not Track” in my browser, I’d like a “Do Not Survey” option.