To demo this I have a simple network. I’m using a Virtual QFX plus Vagrant setup, based on the Vagrantfiles in this repo. I’m running one vqfx10k, connected to one server. The key here is that the server has two connections to the vqfx. One interface is in the default instance, one is in a “Customer” routing instance: 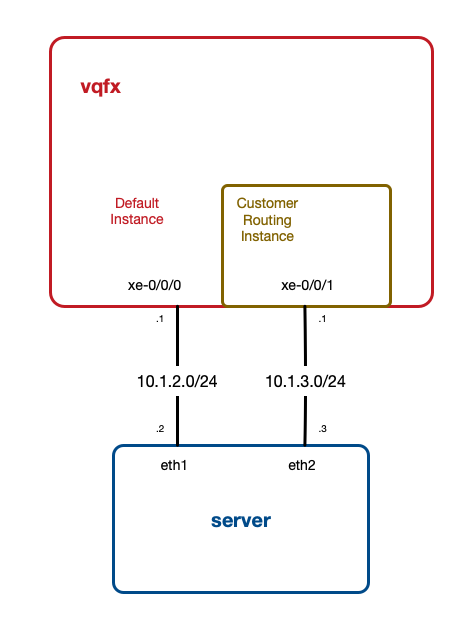 And here’s my SNMP configuration:

Key lines there are routing-instance-access - which allows SNMP polling via routing instances - and routing-instance Customer under community public. The first allows polling via non-default instance, and the second says we can use public for polling via the “Customer” instance. You could have unique communities per instance, or some other more complex set of SNMP ACLs.

Let’s start with polling the default instance, via xe-0/0/0:

The Juniper documentation “Understanding SNMP Support for Routing Instances shows how to specify an instance. The trick is to use "instance"@"community":

Polling the Default Instance via a Non-Default Interface

If I was only allowed to see my own routing instance information, the above options work fine. But what if I am polling via a non-default interface, but I want to see information for the whole device?

If I poll via the “Customer” interface, I don’t get any response:

Hmmm. What if I specify “default” as my instance name?

I couldn’t figure out how to do this from the docs. I think it was Ben Dale that suggested using @community - that is, just use @ in front of the community, but don’t specify an instance name:

Success! That’s the output I was looking for. Easy in the end.

I couldn’t see any references to this in the Juniper documentation. I’ve also found that this behavior changed somewhere between 15.x and 18.x. If anyone finds any docs, let me know?