Proxy ARP was often used in network designs 10–15 years ago, to enable NAT. It helped get around some specific challenges, but it was always an administrative hassle, and caused significant scaling issues. There’s very little reason to use it these days, but sadly it still lingers on, just waiting to catch out junior engineers.

NB: This post is about proxy ARP in the context of NAT - it’s not about using proxy ARP to get around misconfigured network masks/missing routes.

15+ years ago, Enterprises would have a small public IP allocation, delivered to them by their local ISP. The ISP would manage the CPE, and present an Ethernet connection to the Enterprise. That local network would be the public subnet - e.g. 200.200.200.0/24. You could plug in a switch, and directly connect your servers. Give them an address from 200.200.200.0/24, and set the default gateway to be the CPE. Done. 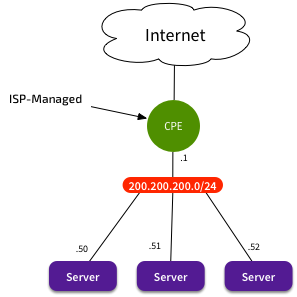 But hang on, what if we wanted to use a firewall? And what about NAT? That started coming into wide-spread use, and Enterprises liked the idea of being able to use a small public IP range for many internal systems. Now our network looks like this: 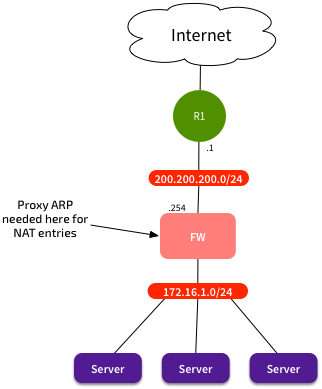 This is where proxy ARP comes in. We could configure proxy ARP on the firewall to say “In addition to your own interface IPs, if you see an ARP request for 200.200.200.50, then respond with your own MAC address.” The CPE would get an ARP response from the firewall, and forward the frames to the firewall’s MAC.

The firewall would see its MAC as the destination, recognise that it needed to process the frame, see that it was to an IP that it had a NAT policy for, apply the NAT policy, and forward the packet to the internal private IP.

That’s all good, and it got around our problem. From the ISP’s perspective, nothing changed - their CPE still had a local public subnet, but now the Enterprise could get that traffic forwarded to different parts of their internal network.

What’s Wrong With It Then?

There are three issues with this setup:

What Should We Do Instead?

People started thinking that NAT somehow required the use of proxy ARP, forgetting the basics of Ethernet/IP/ARP operation. They forgot that all it was there for was so that the packets with a NAT IP destination would get forward to the firewall, so it could process them. The actual NAT policies on the firewall didn’t care about proxy ARP - they just needed to somehow receive the packets, so they could translate and forward them. People thought that a firewall could only NAT IPs that were on a locally connected network, but of course that’s not necessary.

Once we understand that, then the answer is simple: Just set up your routing so that the subnet you want to use for NAT is routed to the firewall. Could be done with static or dynamic routing: 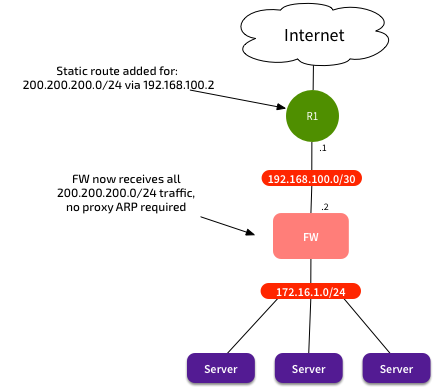 This means that we can now use ALL of the NAT range for NAT - no wasted subnet/broadcast IPs, or need to use any for the gateways themselves. Now when we need to scale the solution, we just route another subnet towards the firewall. No manual proxy ARP configuration required for new NAT entries either - just define the firewall policy, and be done with it. Simpler configurations, simpler troubleshooting, better networking.

There was one wrinkle: If you didn’t control the routing on the CPE, you were reliant on your ISP making the change. In the early 2000s, some of them wouldn’t do it, and you were stuck. By the mid-2000s, most ISPs would do it. You would be very unlucky to find an ISP today that wouldn’t make this sort of change.

Why Is it Still Around Then?

Old habits die hard. Most of us have gotten over it, but there’s still a lot of people who think that NAT somehow requires proxy ARP. It’s remarkable how often it still pops up, given the pain it causes, and that network engineers wouldn’t dream of running a network with hundreds of host routes…yet proxy ARP isn’t much different.

Proxy ARP was always a kludge. Don’t allow it as part of your designs. Rip it out where you find it.