IPFIX is problematic on the Juniper QFX10K switches. Documentation is sparse, and doesn’t have a complete configuration. Behavior changes between versions in undocumented ways. Here’s a couple of things I noticed when upgrading from Junos 17.3 to 17.4. These also apply if you are running 18.4 code. I hit more problems with 18.4, and ended up rolling back to 17.4.

Here’s a graph showing total reported throughput for a QFX10K I upgraded: 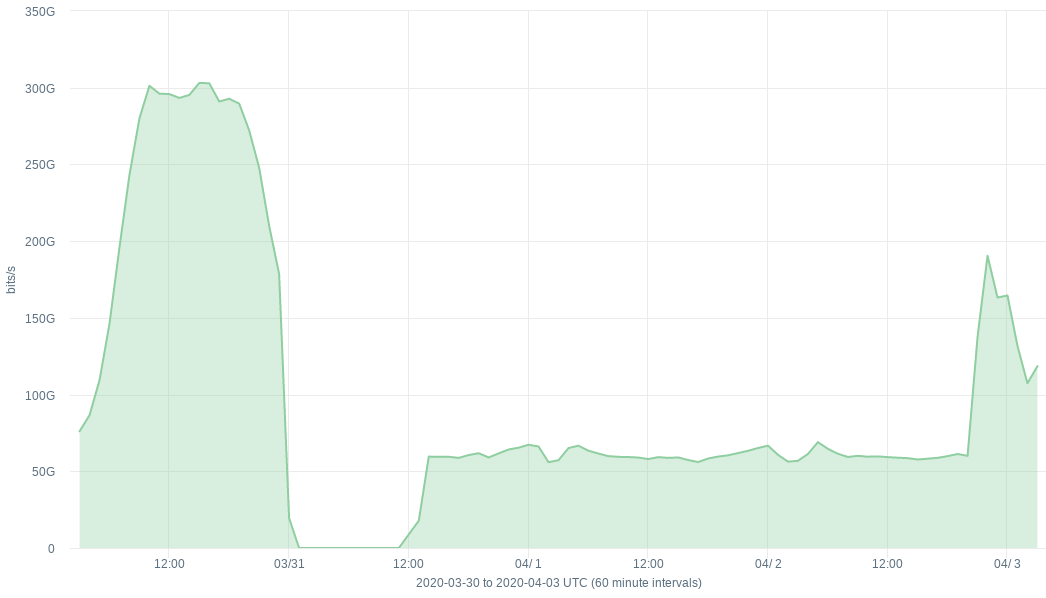 The first configuration change I needed to add was this: set chassis fpc 0 sampling-instance sample-border, where sample-border is the name of the sampling instance I have configured under forwarding-options. This was not required with 17.3. If you don’t do it with 17.4, you won’t get any data.

Some Juniper platforms implement Control Plane DDoS Protection. Implementation varies across platforms and versions. Generally it works OK, but can be very confusing, especially with systems that have shared policers. It might say one thing is triggering a violation, but it’s actually something else.

Turns out that in this case something changed between 17.3 and 17.4, and high volumes of IPFIX now trigger ddos-protection violations. The system ends up throttling itself.

I had to make these changes:

It’s not obvious why I need to change the resolve or ndpv6 settings. My guess is that it’s something to do with shared policers.

If you have low levels of traffic, you won’t hit these limits. My guess is that IPFIX testing for this platform was in low-bandwidth labs, and so they didn’t hit the limits.

Still Don’t Quite Trust It

Reporting is still a bit flaky for these systems, and IPFIX numbers don’t quite match up to interface statistics. Treat IPFIX as more of a hint on the QFX10K, rather than something to rely on.