I have an HP 2910al switch in my lab. I was running firmware version W.15.12.0012, but needed to upgrade, to fix a bug where “~” gets added to the snmp community configuration. I tried upgrading to W.15.14.0007, and it initially looked good, but shortly afterwards got alarms from my NMS about high memory usage.

Digging in, here’s a graph showing the memory usage - you can see how it has been very stable, but then spiked up just after I upgraded: 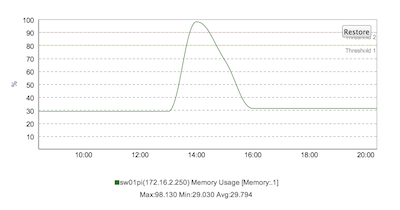 The pictures don’t lie. The switch was noticeably sluggish via CLI, and you can see that the ping response time spiked up:

I rolled back to W.15.13.0008, which resolved my bug, and since then memory & response times have looked stable.

Just another case where it’s so handy having performance data both before and after a change.