Knowing Your Audience...and Showing It

We all know that you’re supposed to “Know Your Audience.” Doing so improves engagement, and avoids faux pas like “Suggested Tweets.” But recently I realised that this doesn’t have to be subtle. Drop hints early on in your presentation that you’ve taken the time to understand the audience - it can really lift the mood.

Companies that obsess about the wrong kind of metrics think that all they need is to get their message repeated many times. So they give employees & partners a list of “suggested tweets.” These are pre-written Tweets that people can send out from their own Twitter accounts, to “generate buzz.” I have seen many companies do this, and it is overwhelmingly lame. It devalues the message, and devalues those who send out these “suggested tweets.”

In the lead-up to the recent Cisco UCS event, many members of the Cisco Champions program sent out the same set of tweets. When I see the same tweet from several people in my stream, it’s obvious what’s going on. If you’re running a marketing Twitter account, then yeah, I expect marketing messages. But if you’re a real person, and I’ve interacted with you before, then it is jarring to see that sort of message. It turns me away from that company/product. Check what Tyler Britten has said about companies sucking at social media:

Now picture a group of people walking in the cafeteria and walking to their tables and all repeating the same few sentences over and over again. You and your group would quickly ignore them or even actively block them from sitting down.

VMTyler: Why Your Company Sucks at Social Media

I have no problems with people spreading a message about something cool & relevant that their company is doing. But it should be a personal, hand-crafted message, not the equivalent of standing on the street handing out flyers. That’s not what I’m looking for with the people I follow on Twitter.

If you’re familiar with Tech Field Day events, you know that they’re tech-heavy events, with little marketing. The delegates do their best to keep the presenters honest, and don’t fall for the usual slogans. So if you were following the #NFD8 hashtag during Network Field Day 8, you might be forgiven for assuming someone had stolen our Twitter passwords:

The <redacted> that @BRCDcomm is doing with <redacted> will be the greatest thing since <redacted>! #SuggestedTweet #NFD8

What happened? Surely the NFD crew didn’t sell out?

Nah…turns out that team at Brocade are pretty sharp, and had taken the time to understand their audience. At the start of the presentation, they handed out an agenda. Included on that was a list of “Suggested Tweets”….with a twist. Note the hashtag used there? It made it a bit of an in-joke, and not-so-subtle dig at those companies that use suggested tweets. By adding the hashtag, we could all have a laugh about it.

They even gave us “Not Suggested Tweets” just in case we weren’t buying their message:

What’s @BRCDcomm smoking? They’re crazy if they think I’d do that with my network. #NotASuggestedTweet #NFD8

I am very much over the Bacon + Unicorns BS, but Brocade did one other thing that showed connection to the audience. They gave us these notebooks, which are just perfect for ‘that’ customer meeting: 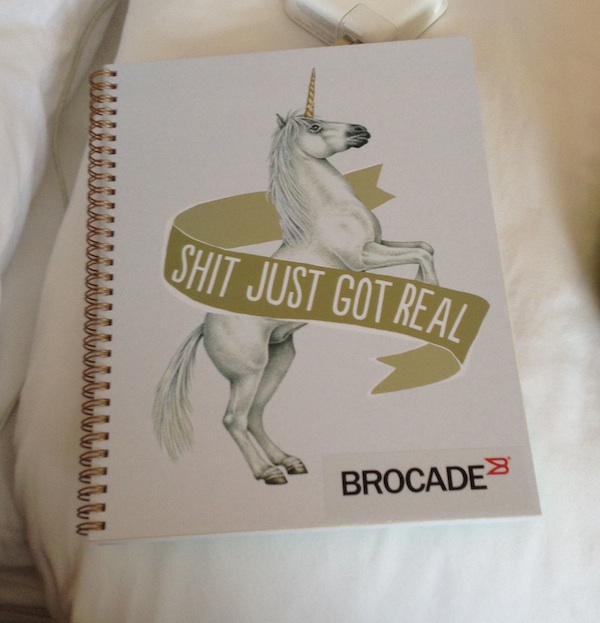 I was always going to be interested in what Brocade had to say, but these things gave me a clear sign that they weren’t just going to give another marketing presentation. (Aside: If you watch Dave Meyer’s presentation, I think we can all agree there was no marketing there).

There are other ways of showing connection to your audience too - e.g. Iben at Spirent made a couple of comments that showed that he had been paying attention to the earlier NFD8 presentations. This immediately drew the audience in. It’s a bit like conferences that develop a running joke or theme - it shows that the presenter is in the here and now, not just delivering another canned presentation.

It’s well-known that understanding your audience helps you craft your message for greatest effect. You can focus on what they need, and skip the other stuff. But what I find interesting is that if you give out some obvious ‘clues’ to show you’ve done your homework, it makes attendees sit up and pay attention. It lifts the engagement, and makes it feel much more like a real live conversation, not just a recorded presentation.

Well done to all those presenters who work hard at these sorts of details. We notice.

Disclaimer: Spirent & Brocade were presenters at Network Field Day 8, and indirectly covered my costs to attend. They place no obligations upon me to write anything, and I do my best to remain neutral. I must admit that I am swayed by the unicorn notebook though. You’ll have to take that into account with anything I say about Brocade in future.

« The Chassis Switch is Dead Utility-Based Pricing Troubles Me »