HP’s “VSR1000 Virtual Services Router” is now generally available. This was first announced at Interop Las Vegas in May, but it wasn’t until Interop NYC in September that it started shipping. This post will give a quick introduction to the VSR, and show how to get it up and running using VMware Fusion on Mac OS X.

The VSR1000, aka VSR1K, is a software router that runs as a Virtual Machine on VMware ESXi or KVM. It will probably also run on other hypervisors. It supports a broad range of services and protocols - e.g. OSPF, BGP, IS-IS, IPv6, MPLS (VPNs and TE), GRE, IPsec, QoS, etc. It runs Comware v7 - the latest major branch of the software that runs on the HP routers and switches that came from the 3Com acquisition (i.e. not ProCurve). It supports a maximum of 16 vNICs. It is conceptually similar to Cisco’s CSR 1000v.

Those of us who were looking for ways to practise with the Comware CLI will immediately be thinking: Lab! And it will certainly work well in lab environments - if you don’t license it, it will run in a bandwidth-restricted mode. I haven’t found the exact number documented, but my limited testing indicates that 30Mb/s is achievable - this is more than sufficient for a lab.

But we should be clear: This is not just for testing - HP is very serious about this being a realistic choice for production environments. One suggested deployment scenario is using it as a Route Reflector - by increasing the allocated memory, you can support millions of routes. It’s a hell of a lot cheaper to add vRAM, rather than putting more memory into physical routers. It would also work well for remote sites where you want to deploy one or two physical servers, and run VMs on top of them. You can now deploy VSR1000 systems to provide IPsec tunnels back to HQ. No need to deploy specialised router hardware. It would also work well in cloud environments, where you could deploy one or more VSR1Ks to each tenant.

HP offers licensing in 3 variants - 1-, 4- or 8-core models. You pay for the number of cores, but there are no further restrictions. Add more RAM if you need. Run it as fast as you can with your CPUs. No paying for bandwidth like the CSR1000v. HP’s testing indicates this sort of throughput:

Don’t ask me why the IPv4 packet forwarding rate is lower for 8 cores than 4. Some sort of typo? The numbers vary across HP documentation too - e.g. see these specs. Clearly the IPsec code scales well with more CPUs though.

First, download the VSR1k from here. You’ll have to sign in with an HP Passport account - this is free to create, if you don’t already have one. Unpack the ZIP file. It contains three files, plus the Release Notes:

We’re going to deploy the OVA file into VMware Fusion 5. You could also do the install by creating a VM, and then attaching the ISO image, and installing from there. Open VMware Fusion, and go File -> Import. Browse to the file VSR1000_HP-CMW710-E0101P01-X64.ova and click Open. You’ll be asked for a location to save the imported file. The default location (~/Documents/Virtual Machines) is probably OK. Click Import. You’ll get a pop-up window that looks like this: 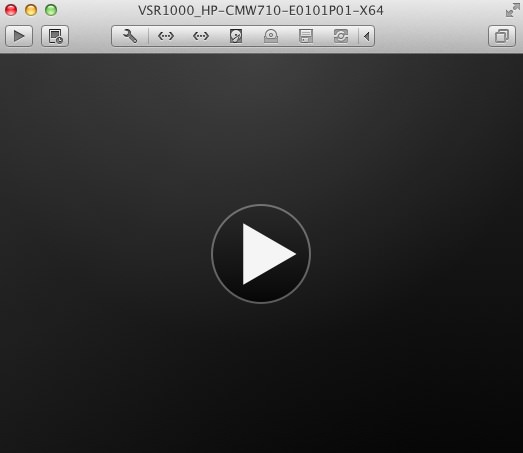 Close this window. You should now see your Import Library: 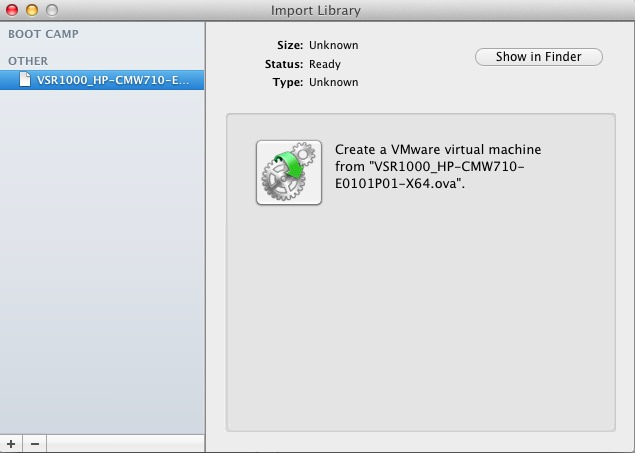 Click on the “Gears” icon. You can then choose the name and location for the new VM. I’m going to use VSR1K_R1 for the rest of this exercise. Click Import. After a few minutes, you’ll have a pop-up showing the console of your new VM.Click the “Spanner” icon, to check/change the VM settings: 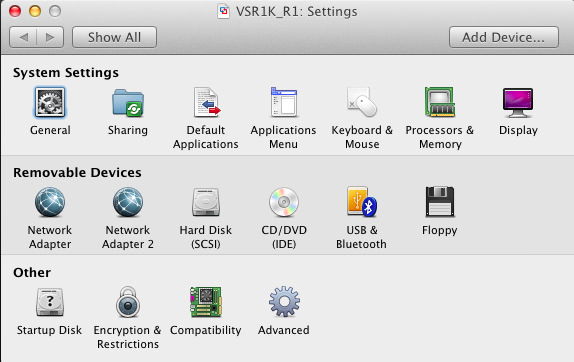 It’s currently set to 1 CPU Core, with 1GB of RAM. The hard disk is 8GB, thin-provisioned. There are two Network Adapters - currently they are both set to Bridged Networking. I want to have one bridged with my Wi-Fi connection, and the other using a private network on my Mac. Let’s change Network Adapter 2 to use a Private Network: 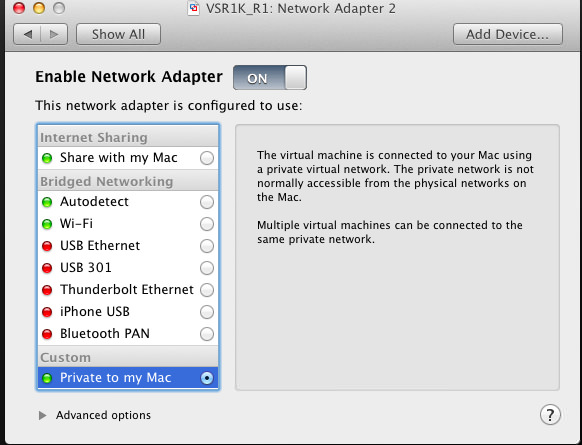 All the other options are OK for now, so let’s power this VM on, and see what happens. You’ll see some boot messages scrolling across the screen, then you’ll probably see it hit this point:

Enter Ctrl+D, then Enter, and you should see something like this:

We now have a working router! Well sort of, we need to put some configuration on it to make it do something first.

If you’re familiar with HP Comware Configuration, you can now start setting up the router however you like. If you haven’t used it before, let’s run through some basic setup. First we’re going to put DHCP addresses on the Ethernet interfaces:

Your exact IP addresses will vary. But now you should be able to ping those addresses from your host system:

Great! Now we want to set up SSH, and add a local user so we can login:

Don’t worry if you didn’t quite follow all of that. Basically we enabled SSH, generated a key, configured the VTYs to only allow SSH, and to use password authentication. We then created a new user, and assigned them the role “network-admin” - this gives full access to the switch.

Now to test it out:

Thanks to techworldwookie for some of the basic Comware setup notes. Configuration Guides and Command references are available here, if you want to learn more. You can now configure static addresses, routing, VPN tunnels, whatever you need. You can also configure SNMP, and add it to your NMS. In future I might add some more posts about configuring these devices, and trying out the auto-deployment functionality.

I wouldn’t rush into deploying this into production just yet. I would be cautiously testing it out, and making sure that it does what you want. I would definitely be running it in a lab, using it as a learning exercise, and seeing if it will work for you. I think that for many routing applications, virtual routers like this are the future. They offer far greater flexibility and speed of deployment. Crucially, we can add resources like memory and CPU quickly and easy, without a large financial penalty. Get your hands on it, and try it out now!